Sarah is the proud owner of her most beloved Bull Terrier Bully.

With almost 10k followers, a budding modelling career and an ad on Amazon, this Bully is one pup to be reckoned with!

Why did you decide to open up a social media account for Bully?

I decided to open up a social media account for Bully to document his life and to have a platform of images/ videos easily accessible to people who wanted see what he was up to.
It just seemed easier to have a public account for him that family and friends could access whenever they liked, as opposed to me sending multiple text messages all the time.
And I really wanted to reach out to other Bull Terrier owners and admire their babies as well.

It has truly been a dream come true!
I am not tech savvy at all, but through building a social media account for Bully we have met so many amazing people and fur-babies from around the globe, which has been pretty paw-some.

Social media has given Bully (who we dubbed lil Mr. Hollywood because he is a total stud and loves the camera) so many opportunities!

He is now an ambassador, professional model, a pupfluencer and has been featured on several popular accounts! He even has an ad on Amazon!
We have been so blessed. Talented artists have also created artwork of Bully that are simply breath-taking!
It has been so unreal but exciting at the same time, and he truly loves all the attention.

What is the best, and in contrast, not so great thing about being a pet owner?

What is the best part of being a pet owner? EVERYTHING!
We adore and love Bully more than anything in the world. We love him to the moon and back times infinity and with him in our life, it is impossible to ever have a bad day.

In contrast the worst thing about walking around with Bully is the prejudice and the ignorance that comes from people judging him in public.

There have been a few instances where people in public have assumed that he was a “red-nose” Pitbull and with that comes a lot of fear.

But in reality Bully thinks everyone and everything are his friends, even butterflies!

He would never harm anyone unless he senses something is wrong or that you will hurt him or hurt me and my hubby!
Actually…  he might attack you if you are stuffed with peanut butter and topped with bacon! 😆

If you could ask Bully one question, what would it be and why?

My husband would ask him “why are you so funny” and “how do you come up with new stunts to pull every day?”

I would ask him what Jesus is really like because I am truly convinced that when Jesus made Bully he was just flat-out showing off.

Bully is as ‘bulltiful’ on the inside as he is on the outside.
He is my real life angel, my heart, my soul and if it isn’t obvious enough, we love him more than anything in the world!

What is the silliest thing he has ever done?

He makes us laugh every day especially when he hucklebutts (fast breakdance Bull Terriers are known for).
He also loves taking a bath! He gets so excited about it that he runs around in circles and tugs on our shirts! 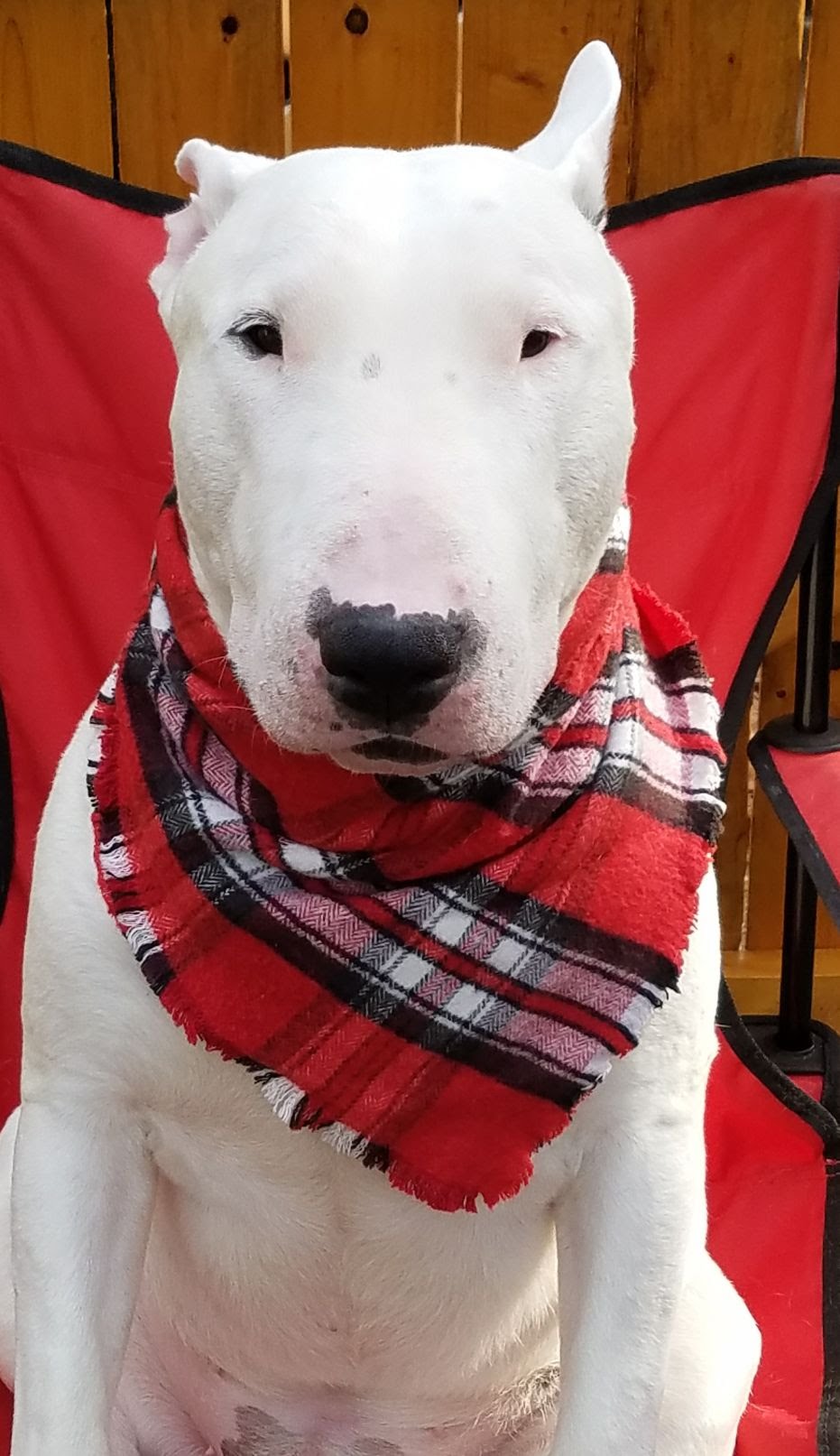 If you could be any pet, what would you be and why?

I would be a Bull Terrier because they are truly amazing, beautiful, majestic animals, and so much fun!

Bully is like a three-year-old clown that pulls shenanigans on the daily and is constantly making us laugh.

He loves adventures and enjoys being held like a little baby and rocked. He even enjoys being snuggled from time to time.
He also has really unique shaped triangular eyes which are super cool.

Why did you decide to adopt Bully and what is the significance behind his name?

My husband fell in love with this breed of dog when he first saw a picture of a Bull Terrier in a Dog World magazine when he was 18-years-old.
He was so mesmerised by their triangular-shaped eyes and egg-shaped head, that he knew from that moment on one day he was going to own one.
When I met my husband decades ago one of our first conversations was about buying a dog.

And when he showed me that picture (he carried it for a long time) of the Bull Terrier, I was immediately on board.

But what we didn’t know then, was that it would literally take us 31 years to finally bring one home!
I also remember saying to my husband that when we buy a Bull Terrier I would name him ‘Bully Badass Harkness’ because he was a bully and he would be badass.
Bully was so worth the wait and he is the greatest fur-baby on the planet.
We realize how blessed we are every single second of every single day and how lucky we are to be his paw-rents.